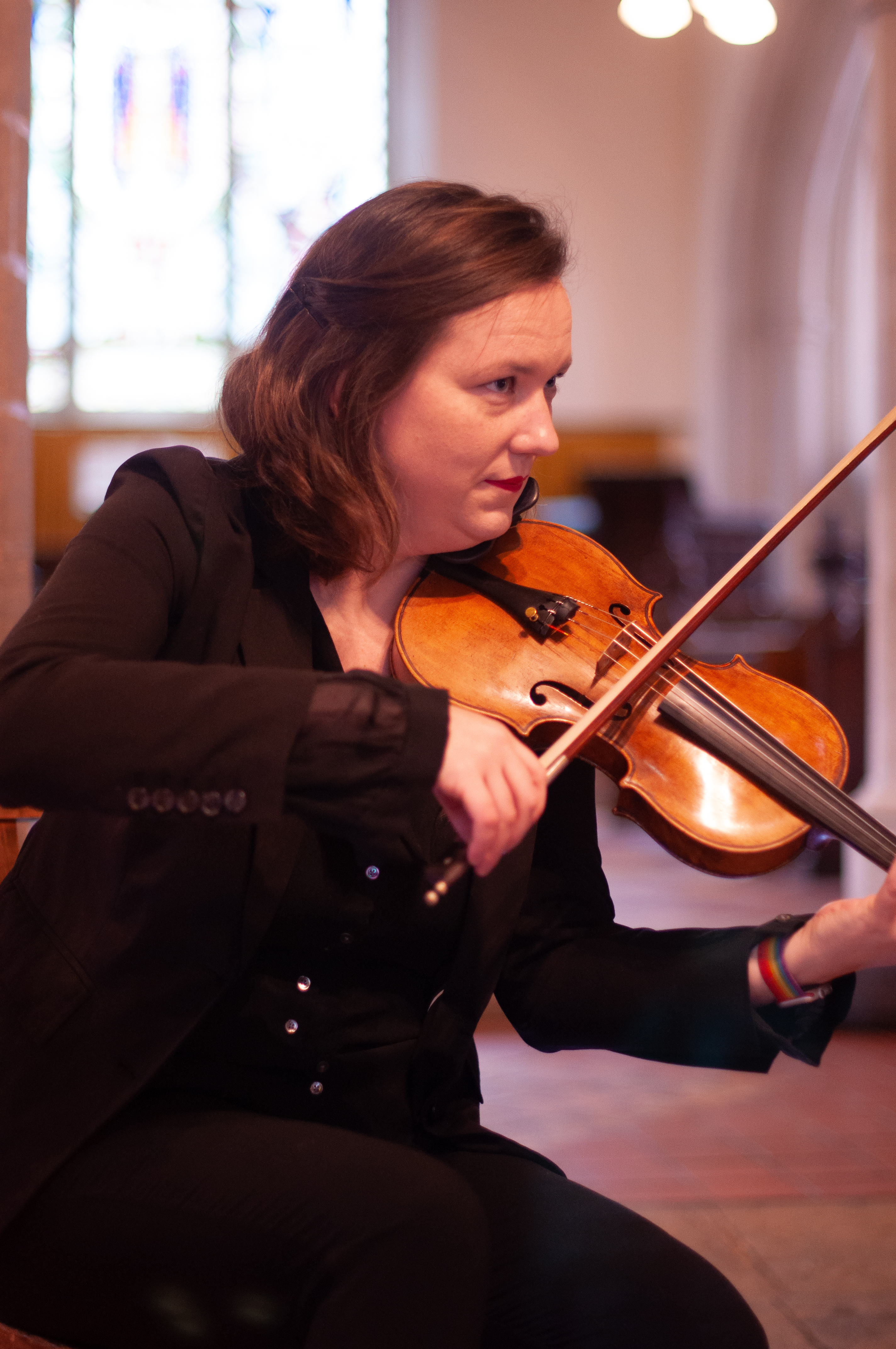 Paula Muldoon is a multi-talented violinist, software engineer, and composer based in Cambridge, UK. Currently the leader of the Cambridge Philharmonic Orchestra, her international performing career has taken her to twenty countries on four continents.

After an exciting 18-19 season where she performed the famous violin solos in Richard Strauss’ Ein Heldenleben with the Cambridge Philharmonic and Nikolai Rimsky-Korsakov’s Scheherezade with the Norfolk Symphony Orchestra, Paula opened the 19-20 season by releasing DeskNotes, a YouTube channel with 90-second videos demonstrating tips for orchestral string playing. Later projects this year include recording a CD of her own solo violin compositions and various solo performances around Cambridge.

Paula was a member of the Royal Liverpool Philharmonic Orchestra, and subsequently spent several years living in London and performing with ensembles including the Orchestre Révolutionnaire et Romantique, the London Symphony Orchestra, the Philharmonia Orchestra, and the Orchestra of the Age of the Enlightenment, along with conductors such as Andris Nelsons, Sir Simon Rattle, Sir John Eliot Gardiner, Marin Alsop, and Esa-Pekka Salonen. Highlights of her career include guest leading the Xi’an Symphony Orchestra in China, numerous film recordings at Abbey Road Studios, and performances at Carnegie Hall in New York City.

In 2017 Paula retrained at Makers Academy as a computer programmer and now combines violin performance with her career as a software engineer at Cambridge Cognition, where she writes code that is used for worldwide clinical trials.  A sought-after speaker in the programming community, she is one of WeAreTechWomen’s 100 Women in Tech and on the Computer Weekly Women in Software Power List.

Paula composes music for solo violin, which she shares with her community on Patreon (patreon.com/FiddlersCode). Her most recent pieces include Woman and Cape Cod the Beautiful, a nod to her hometown of Falmouth, Massachusetts, which was also the home of America the Beautiful lyricist Katherine Lee Bates. Her debut single, Get Outside, is now available on Spotify and iTunes.

Paula is a graduate of the Guildhall School of Music & Drama (MMus 2012) and the University of Michigan (B.M. 2010), studying with Detlef Hahn and Aaron Berofsky. In her spare time, she enjoys reading, crocheting, Star Trek, cryptic crosswords, drinking good coffee, and playing with her Cockapoo. 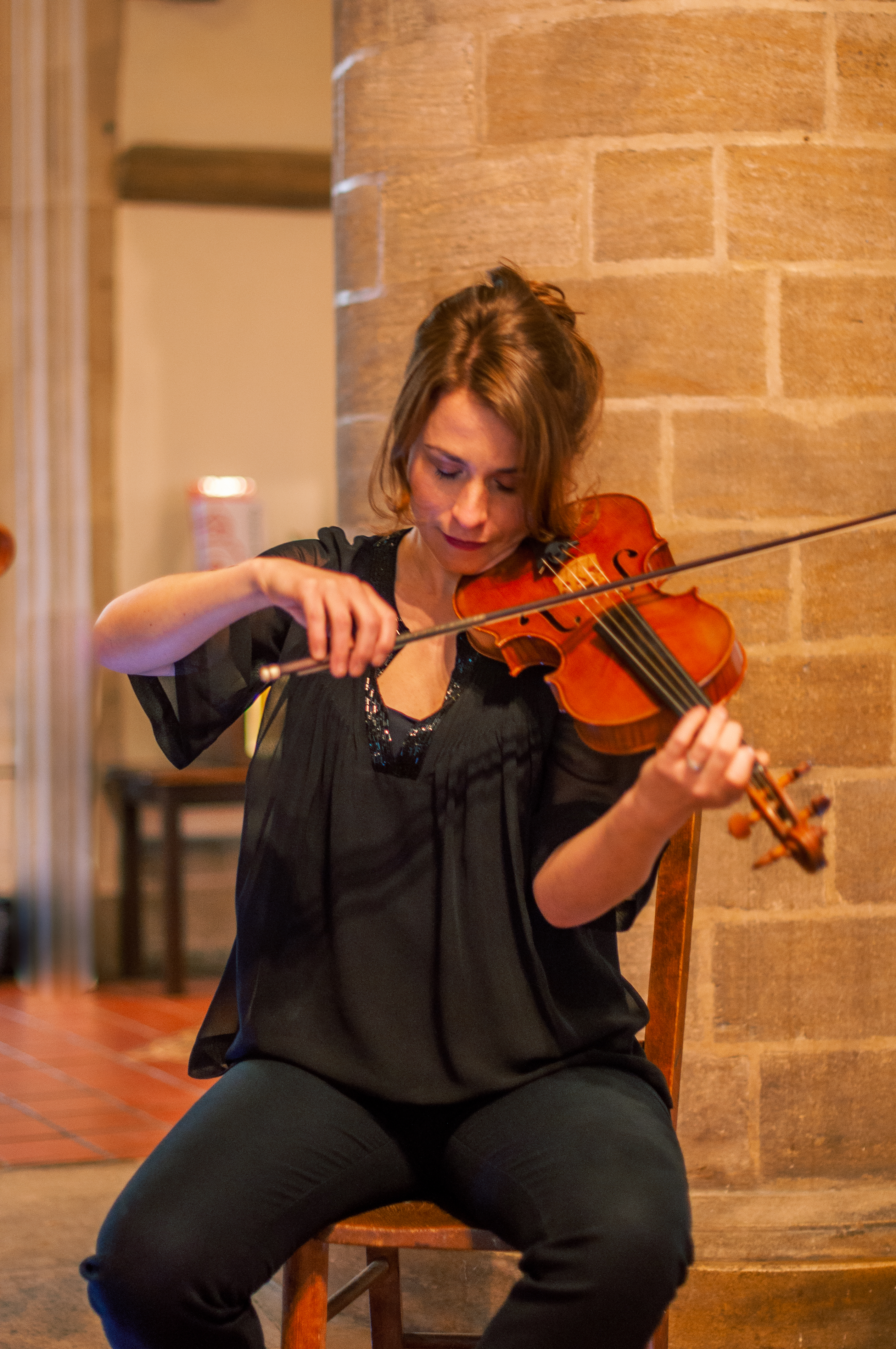 Rachel Stroud is a baroque violinist, and is currently undertaking a Ph.D. in Musicology at King’s College, Cambridge University. After graduating with a first-class degree from Cambridge in 2010, Rachel toured for a year with the European Union Baroque Orchestra before studying at the Royal Conservatory in the Hague with Walter Reiter and Kati Debretzeni.

She now works professionally as a freelance violinist alongside her academic studies, and has performed all over the world in countries ranging from Latvia to Argentina with orchestras such as Music For Awhile, OAE, Brecon Baroque, Ex Cathedra and Les Passions de l’Ame, amongst others. Her research interests include the roles of sociality, agency and objects in performance, and she is currently investigating the relationship between notation and performance in Beethoven’s late string quartets.

Rachel represents the voice of her generation of period performers on the Council of the Academy of Ancient Music, and plays on a baroque violin made by Jonathan Woolston which is on loan to her from Nigel Brown and the Stradivari Trust. 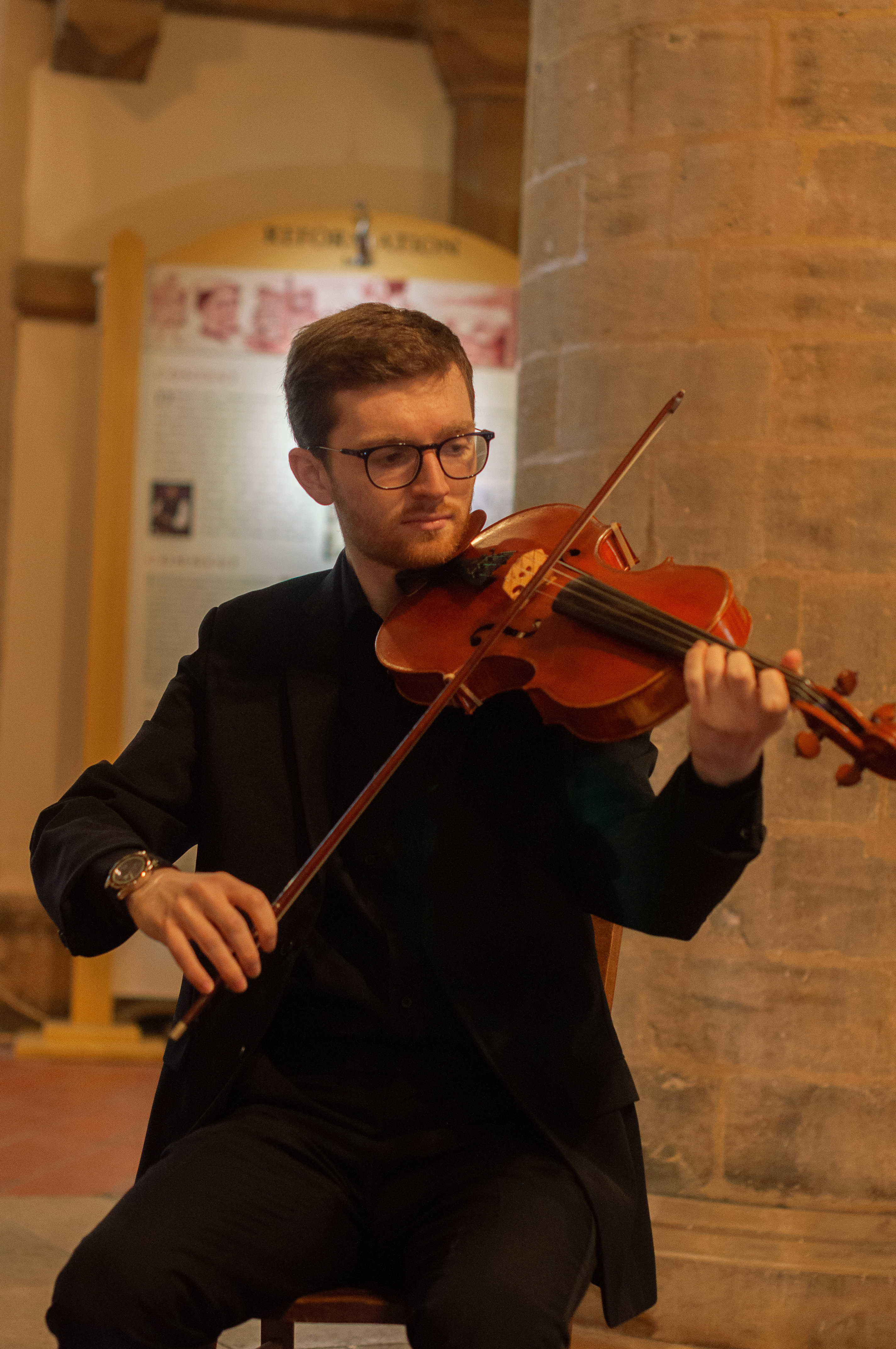 James Foran is an Irish-English violist based in Cambridge, currently reading Musicology at Selwyn College. In 2019, James graduated from the Royal Academy of Music where he studied viola with James Sleigh and baroque violin with Nicolette Moonen. James has a particular fervour for chamber music and in 2018 was awarded a place on the Academy’s Advanced Specialist Strings Scheme in which his quartet received mentorship from Alex Redington of the Doric String Quartet. James was consequently invited to perform in the Academy’s ‘Amazing Women at the Academy’ festival and went on to give a tour in Italy.

James has performed at many of the country’s most prestigious venues including Wigmore Hall, The House of Lords, the Royal Albert Hall, Cadogan Hall, and the Universities of Oxford and Cambridge. James has performed alongside top artists in the profession including Rachel Podger, James Ehnes and Rafael Wallfisch. James is an experienced orchestral musician and has lead and co-lead numerous viola sections including the Royal Academy of Music Baroque Orchestra, Musical Theatre Orchestra, Central London Chamber Orchestra and Cavendish Baroque Players. He has worked with many famous conductors including Sir Mark Elder, Marin Alsop, James Newton Howard, Edward Gardner, John Butt, and Trevor Pinnock.

James’ research interests focus on the relationship between music and religion from musicological, theological and philosophical perspectives. James is currently researching late-Medieval conceptions of the relationship between music and God with Dr Alan Howard. He is also studying semiotics in the mystical theology of St. John of the Cross under the supervision of Dr Rowan Williams. 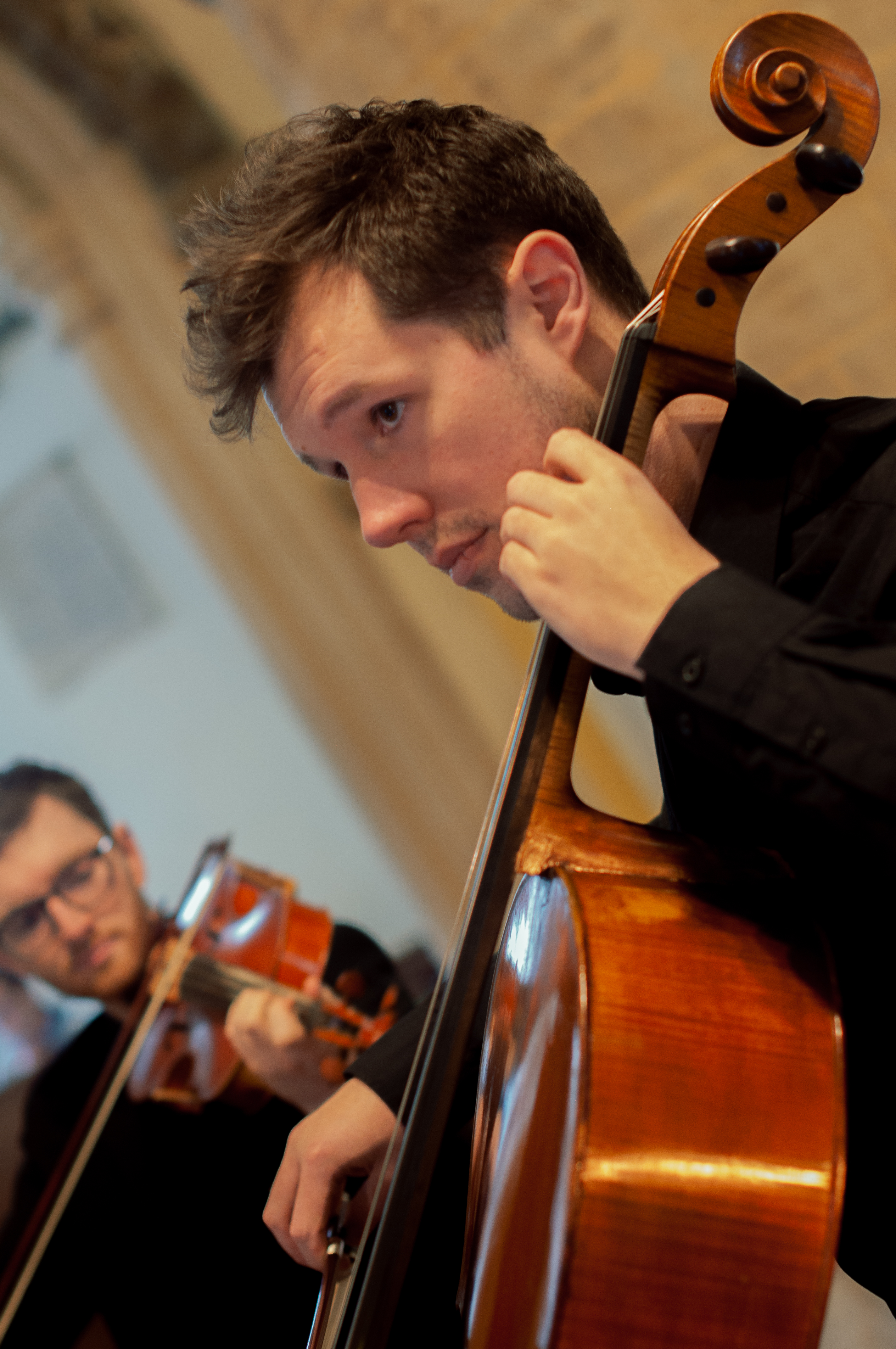 Recipient of the Freda Dinn and Ida Marbett Award, St James Chamber Music Prize and the Musiciens Entre Guerre et Paix, Joshua Lynch is a passionate devotee of chamber music and has already enjoyed a diverse and creative career. Joshua studied with Emma Ferrand and Gillian Today at the Royal Northern College of Music and then continued his studies with Ursula Smith at The Guildhall School of Music and Drama.Joshua has performed at the Wigmore Hall, The Crucible (MitR), St Martin-in-the-Field and Salisbury International Arts Festival.

Joshua is the cellist in the Vectis Duo with his duo partner, pianist Sally Birkett, where they enjoy a busy concert schedule. He is also the Principal cellist of the Cambridge Philharmonic and has played with the London Symphony Orchestra and Britten Sinfonia. Away from performing Joshua is a passionate teacher and holds the position of cello tutor at the Stephen Perse Foundation in Cambridge and is a chamber music tutor at the Junior Guildhall School of Music and Drama. He is also a regular tutor at ProCorda, Aboyne Cello Festival and NLMS Summer School.